This is an old and never ending discussion in the aquarium hobby. Can you make your own chiller and how? On websites using English language, mostly American ones, the application is chilling a reef tank a few degrees in a hot climate. I came into this from another angle, namely the chilling of cold water tanks for native north European fish species. In practice the same technology can be used.

There are several fundamental types of cooling. Generally you need a heat sink, that is some kind of cold area to cool something. One can use a "natural" such area that is found in the local environment. This is popular in cold environments. One can use a small flow of tap water to keep a metal pipe cold and then lead the aquarium water by. Other solutions are to dig a copper pipe into the ground, use a pond or a stream outside. Evaporation chilling is also very popular in reef tanks. Fans blow air over the surface in the tanks and the water is cooled by the evaporation. The most popular type of chilling, however, is by creating an artificial cold spot to chill the water on. This is done by a phase change machinery, the same machinery that is used in refrigerators, freezers, air conditioners, heat pumps and air dehumidifiers.

I assume that the readers have some basics knowledge about these systems, but I will do a short sum up. The main mechanical part in the system is the compressor. Other than that the system consists of a closed pipe loop. The loop is divided into two parts, the condenser and the evaporator. The condenser is the hot part where the medium exists as liquid. The evaporator is the cold part where the medium is in gas form. The compressor sucks gas out of the evaporator and pushes it into the condenser. The high pressure causes the gas to condensate and as a result it releases energy as heat. The condenser is cooled with a fan and thus energy is removed from the system. The liquid then goes through a narrow vent into the low pressure evaporator and evaporates there, thus sucking up energy from the environment. The evaporator is put in contact with the water.

When I see DIY chillers on the net I typically divide them into two extremes. One extreme is the dorm fridge chiller. This is just a hose going in a spiral inside a small fridge. The aquarium water goes through the hose. The other extreme is usually performed by engineers, technicians or people who know engineers and technicians. They often buy the parts separately, or get them for free. They use titanium coils and powerful compressors. Then solder together their own circuits of copper pipes before they clean the pipes out with vacuum pumps and fill them with cooling medium. These systems are often really great stuff and better than the ones you buy in aquarium stores. The weakness is that you need a very expensive vacuum pump to clean out the circuit. The titanium pipes, cooling medium, priming equipment, and other parts and tools can be really expensive or difficult to get for DIYers. Also, quite a bit of practical knowledge about pressure levels and such is needed. On the other hand, anybody can make a fridge chiller. The only problem is that it doesn't really work. The reason, as far as I have understood, is that the water is practically insulated from the evaporator by the air in the fridge and the plastic in the hose. Thus the water doesn't get chilled a lot and the evaporation goes on at a very low temperature. This leads me to an important point:

The efficiency of the chiller depends on how hot the evaporator is kept.

If evaporation goes on at a high temperature then efficiency of at least 2, and maybe up to 5, is possible. That is, the chiller can remove several times more energy than it consumes. But if evaporation goes on at a very low temperature, the cooling ability goes down to 0. This means no energy removed, no matter how much energy the compressor uses. The beauty of this is that we have the relatively warm aquarium water to heat the evaporator with.

The power consumption of the compressor increases with the pressure in the system. That is, temperature.

Note: These assumptions are based on studies of charts I found on the website of Danfoss , a compressor manufacturer. I can't guarantee that I have interpreted the charts correct. So use this info with care. I am not a mechanical engineer.

This chiller has the advantage of the dorm fridge chiller in that it is based on cheap parts that can be bought in consumer electrics stores. It does not require sealing, vacuuming or filling any pipe circuits. Yet, it can be made very efficient and powerful, provided that a good coating can be found for the evaporator pipes.

Take a look at the drawings below. An air dehumidifier is almost identical to an aquarium chiller on the inside. It's a big box that air blows through. In a chamber below the air stream the compressor sits. The difference is that in a dehumidifier the evaporator sits in the air stream instead of in a waterproof container below it. But it turns out that in certain dehumidifiers the evaporator pipes can simply be bent down out of the air stream and then wrapped in a waterproof container. If the pipes are first covered with a thin layer of salt water resistant coating and walls are put into the container to force the water to take a long route through it then you have a good heat exchanger. Not as good as a titanium one, but hopefully still usable. I was going to use my chiller for an FW tank so I didn't need to coat the evaporator. 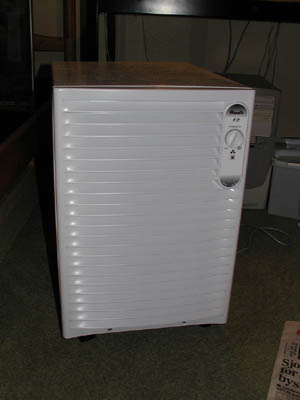 This is the dehumidifier seen from the front. It is a Woods DS12. I think it's a Canadian brand. The effect is given to be 210 Watts. I believe the fan is 35 Watts and the compressor is 175 Watts. 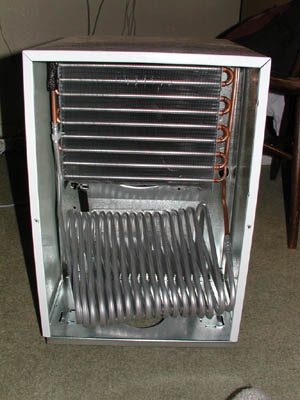 The backside after I bent down the evaporator. The main modification on the dehumidifier itself took about 15 seconds. Nice. The pipes were really soft and easy to bend. 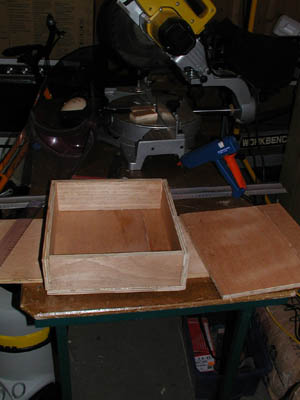 Then I needed a waterproof container. I didn't have any acrylics handy so I took some plywood. Really silly of me. I should have made a real acrylics container that could be opened with screws. That way I could have inspected the inside and opened it for cleaning. 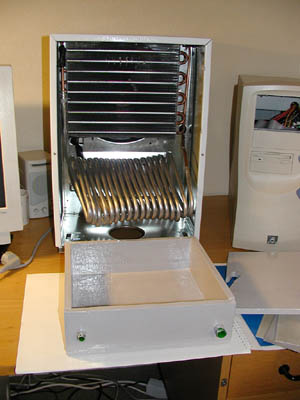 I coated the container with 2 parts epoxy paint, and glued in two pieces of plastic pipe as water inlet and outlet. 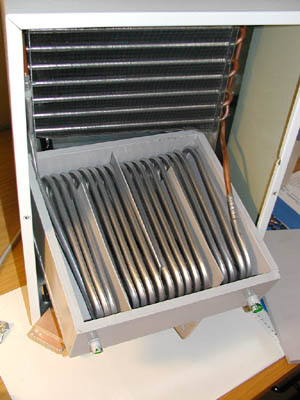 Three sheets of PVC used as walls to get more contact time between water and evaporator. Probably much too little. Didn't know the importance of keeping the evaporator as hot as possible. 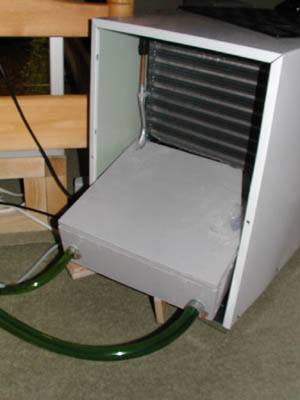 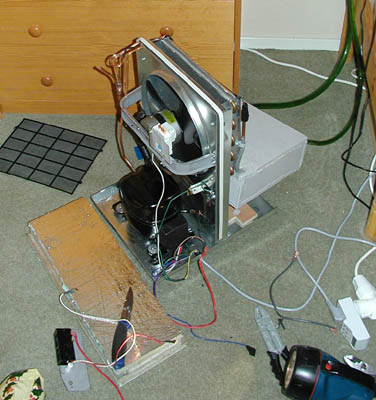 Finally, 3 electric switches inside were removed. There was a timer for defrosting, a float switch to shut off the device when the water cup is full, and the humidity sensor/selector. All these were just removed and the wires connected so that the device is always on.

I now control the device with a timer. That works for me, but a thermostat would have been best in most cases.

Most people use the chillers for saltwater so the evaporator pipes must be covered with some kind of coating. This is a little problematic. I have not been able to find an ideal coating. I am very interested in hearing about other people's experiences here. The problem is that there are so many demands to be met. It should be:

1 and 2 are obvious. 3 is difficult with plastic. We probably have to accept that it will not be very heat conducting. Instead we must try to apply it as a very thin film. Elasticity is very important. This is the main problem in fact. The evaporator pipes shrink and expand with temperature changes. Epoxy is generally quite stable over a large temperature range. Thus there is tension between the two when the temperature varies with 50 degrees Celsius (90F). The epoxy is also too stiff to expand and shrink with the metal. This has been tested by Chris Paris. Take a look at his site:

The heat exchanger should be made out of plexiglass, or at least have a plexiglass lid. This would allow easy inspection of the inside. It is very useful to be able to control that no air pockets are left inside after start up. Such pockets will damage cooling. Ideally it should be designed so that these pockets never occur in the first place. But I have not been able to come up with such a design. The fact that the pipe circuit is already in place seriously limits the freedom to design the heat exchanger. But that is just the price to pay here.

The exchanger should definitely be made so that it can be opened up later. This is possible by leading the pipes in through the sides and using a lid that can be opened with screws. Without this it's impossible to clean the heat exchanger and remove objects inside.

A thermostat should be used. It is more practical for temperature control unless, as in my case, the chiller is too weak and needs to run most of the time anyway. But the practicality is not the only reason. A thermostat is important for security too. The sensor for the thermostat should be placed inside the heat exchanger. This will switch off the chiller if the pump fails. That is very important. Pumps can quite easily clog up and fail. If this happens with my system the water inside the chiller will freeze to a solid block of ice and burst the heat exchanger. If the chiller had been placed below surface level it would have siphoned most of the water out of the tank once the ice melted.